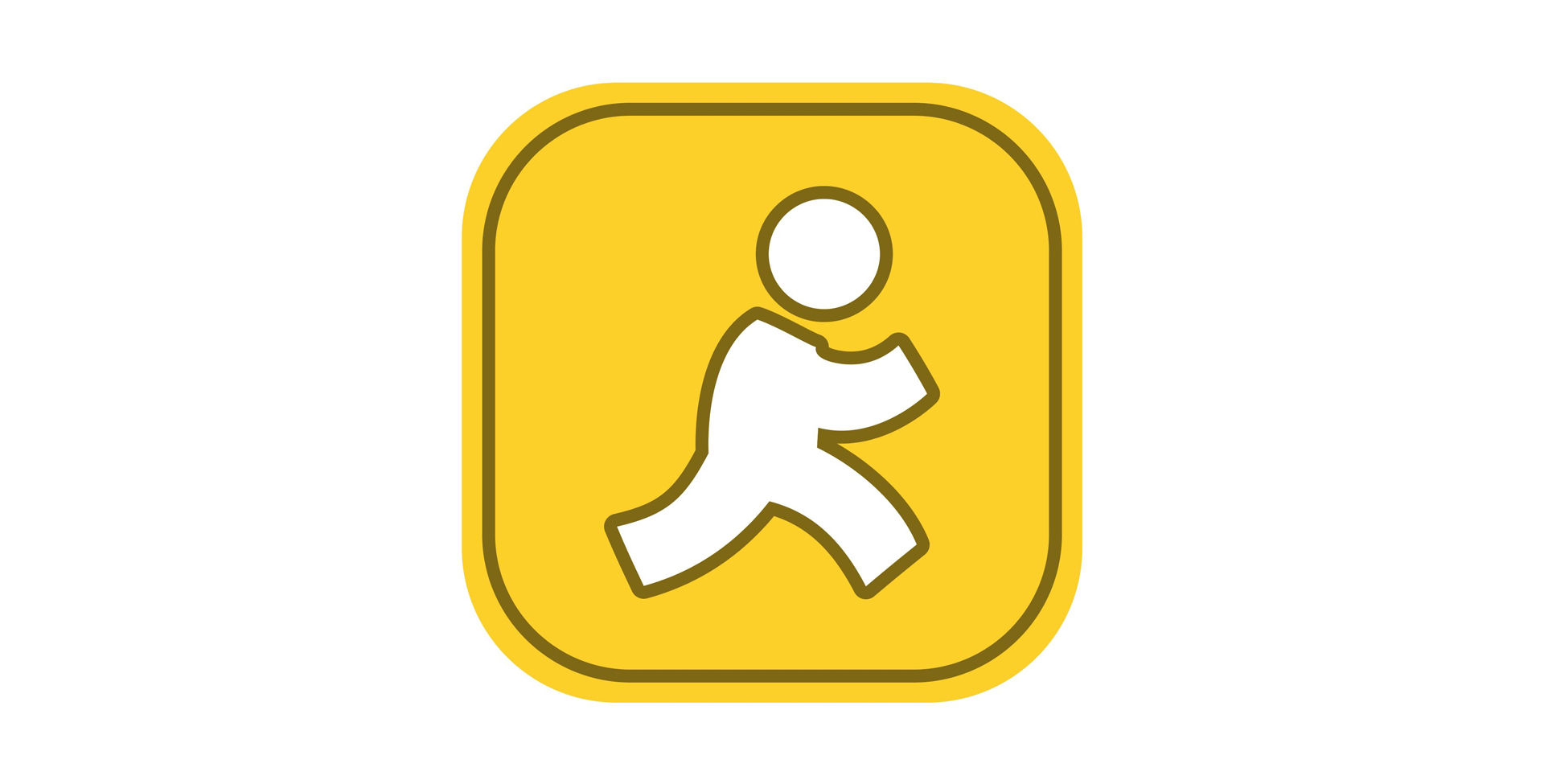 I know a ton of investors love AOL (AOL:NYSE) and think it is a screaming value play. I disagree. I think AOL is a decent company, but I do not believe it represents a huge value opportunity at this point.

Most bullish arguments on the company are based on EBITDA (earnings before interest, taxes, depreciation and amortization) multiples expanding. After hearing AOL’s first-quarter earnings conference call, I don’t think its EBITDA multiples will expand, and furthermore, I do not think EBITDA is meaningful. When looking at cable networks that require ongoing capital expenditures, EBITDA becomes even less relevant, I don’t trust EBITDA. Over the next few

years, I think investors will shun EBITDA; it is simply too tied to the technology bubble of 1999 and 2000.

In the first quarter of 2002, EBITDA jumped 3% to $2.1 billion, clearly indicating AOL is betting on a second-half rebound – which is by no means a given. My bottom line on the quarter is as follows: AOL lowered guidance said the second quarter of 2002 was going to be weak, said the second half of 2002 should strengthen, then took a $54 billion charge. Wow. Although the quarter did not immediately implode the stock, it certainly was not a strong showing, and the stock has begun to trade lower since the call. Whenever a company takes such a huge charge, investors need to ask themselves what’s included and whether the company is fudging a little. I am always concerned when I see huge so-called noncash charges — a billion here and a billion there can easily get lost.

I have done some cash flow analysis, and I believe it shows AOL is worth substantially less than where it is trading today.

As it is comprised today, AOL is a conglomerate of the Internet, publishing, and entertainment companies. There is nothing complex about the business, and I believe AOL provides investors a terrific opportunity to study cash flow — defined as cash flow from operations minus capital expenditures — to arrive at a fair valuation of the company. Forget about EBITDA, it won’t help you anymore.

Take a look at these breakouts: 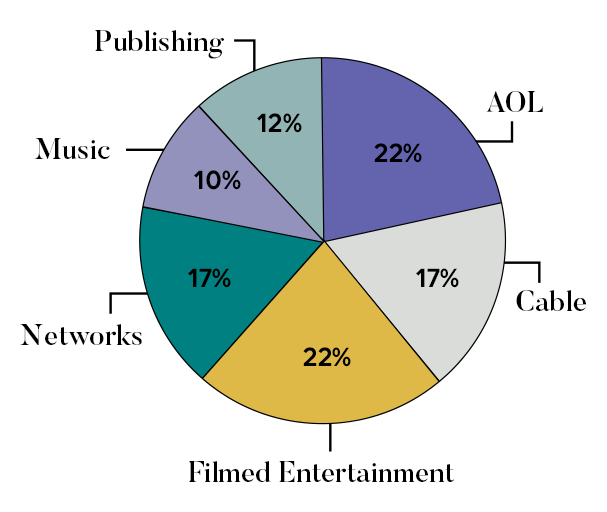 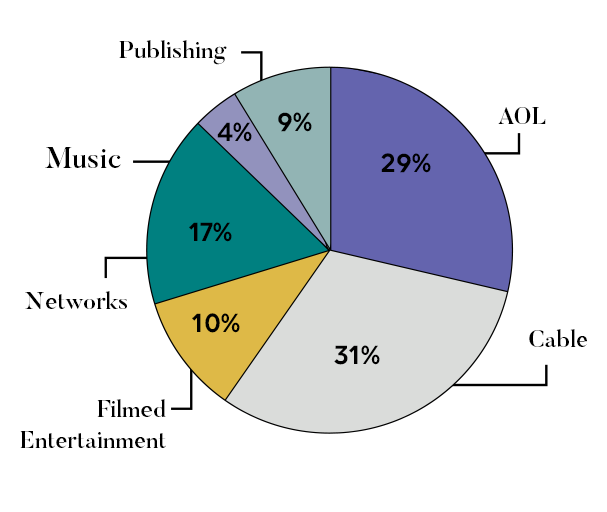 To me, it looks as if AOL has been cutting costs in the AOL segment to grow EBITDA in the face of slowing revenue growth. The cost-cutting theme was further supported in its first-quarter earnings release, which reported decreased CAPEX, while actually increasing depreciation and amortization. This will work in the short run but cannot be successful over the long term. When CAPEX and depreciation levels return to normal, AOL’s FCF results will suffer.

I analyzed AOL Time Warner, AOL only, and Time Warner only from 1998 to 2001. Though some of the results do not provide for apples-to-apples comparisons in all years, they provide an excellent guidepost for what type of normalized FCF the combined company can generate. The table below provides selected financial results for Time Warner only from 1999 and 1998. I define FCF as cash from operations minus capital expenses. This is the true cash flow available to investors. Historically, Time Warner was able to garner only a 5% to 6% FCF margin during the strongest economy the country has experienced in some time. The results are not poor, but they would not demand any type of premium valuation.

Time Warner Selected 1999 and 1998 Results Reported in billions, not restated 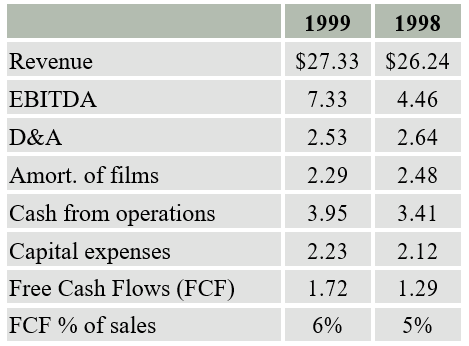 The next table outlines the AOL results before the merger. Historic AOL FCF margins were a stunning 17%; AOL was in fact a cash cow. While the results were recorded during the Internet bubble, the numbers are still solid. Going forward you could say AOL margins should decline because the business is slowing, advertising revenues cannot possibly return to 1999 and 2000 levels, and it is actually at risk of losing a ton of subscribers as broadband picks up. Yet you could also argue that since the AOL division is combined with a bigger organization (the merged entity), it should enjoy some operational synergy. I think the margins will continue to decline because the business has nowhere to go but down, yet for the sake of this analysis I assumed the AOL division would maintain near-perfect FCF margins of 17%. Note this is a best-case scenario analysis, which highlights how wrong the bulls are and how much risk is actually in the stock.

AOL selected 2000 and 1999 Results Reported in billions, not restated 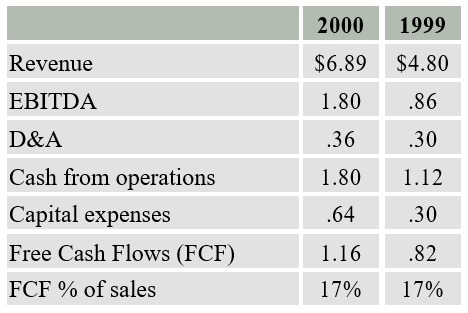 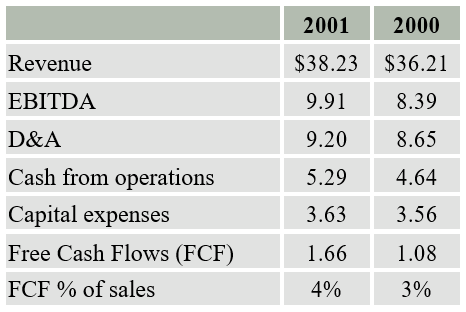 In a stunning value-destroying move, AOL Time Warner managed to report FCF of only $1.66 billion, for a margin of 4%. I am not sure how it managed such terrible results. Still let’s give AOL the benefit of the doubt and let’s assume that it magically can turn things around. Let’s even go crazy and for this example assume that it even increases historic Time Warner FCF margins to a healthy 8% (note: this is extremely unlikely) . With 8% margins coming from Time Warner and 17% margins coming from the old AOL group, the combined entity would yield a FCF margin of 10%. Calculated as follows: revenue weighting from AOL (22%) times AOL margins (17%) plus revenue weighting from Time Warner (78%) times fictitious Time Warner margins (8%).

Consensus revenue estimates for 2003 are $45 billion for the combined company, which would yield FCF of $4.5 billion. Using a short-cut perpetual value discounted cash flow model, I come up with a total enterprise value of $90 billion. Subtracting debt (and debtlike balance sheet items) of $30 billion, you get a total equity value of $60 billion or $13.60 a share. Note that $13.60 is a best-case fair market value and it leaves no room for any share appreciation an investor would expect.

During the first quarter of 2002, AOL actually reported stronger FCF margins, coming in at $1.124 billion (calculated as cash flow from operations minus capital expenses), representing an 11.5% margin. That’s much better than my expected 10% margins, though I think total 2002 results will trend much lower; eventually capex expenses will catch-up with AOL. Further, the company also suggested during its conference call that second-quarter FCF would not be as strong due to irregular revenue and expense timing in the first quarter. Apparently, AOL got revenue sooner than it expected and did not have to pay some expenses until later than expected (likely in the second quarter). Both accounting treatments worked in AOL’s favor. Finally, as I wrote above, I am always leery of large write-offs and charges, a few billion of real dollars always seems to get mixed in!

If you assume that AOL will not achieve the magical results I have outlined, you could be looking at a $10 or less fair market value. So much for a compelling valuation at $20, or now $17 — the stock moves lower everyday; it is hard to keep up! Either way, I do not believe AOL is amazingly undervalued as most talking heads would have you believe. AOL’s businesses are simple and straightforward, and there is no reason not to value the company based on FCF. Further, I think the real problem at AOL is that the historic AOL division is beginning to perform poorly and is not capable of producing anywhere near the 17% FCF margins it did in 2000 and 1999. The combined businesses are not bad because they merged; they are bad because they are overvalued. I would avoid AOL; you will get to own it at much lower levels.

The information and opinions contained in this report are believed to be reliable, but TheStreet.com does not guarantee its accuracy or completeness. The information reflects current market conditions and is subject to change without notice. This report is not intended, nor is it to be construed, as an analysis or recommendation of any security that would be sufficient to form the basis for an investment decision. Any person receiving this report and wishing to effect a transaction in any security discussed herein, must do so through a registered broker-dealer. TheStreet.com does not accept any liability whatsoever for any direct or consequential loss arising from any use of material contained in this report. By accepting this document you agree to be bound by the foregoing limitations. © 2002 TheStreet.com, Inc. All rights reserved.